During the past half year, oil prices have been falling dramatically, from $115/barrel in June 2014 to less than $50/barrel today. For car buyers, this plummeting oil index means cheaper gas prices when refueling. For example, in the U.S. during that same period, gas prices have fallen from $3.7/gallon to about $2.1/gallon. Historically, cheap oil and gas has meant that more car buyers turn their focus away from fuel efficient vehicles, which sales data of hybrids like the Toyota Prius supports.

For example, during the 2008 oil crash, when U.S. gas prices dropped by 58% in half a year, Toyota Prius sales in the U.S. fell by 47% (see figure). More recently, during the latter half of 2014 gas prices dropped by 31%, and Toyota Prius sales fell by 22%. The data is admittedly noisy, influenced by shoppers' preferences to buy on certain months, and affected by random external factors like Toyota Prius production slowdowns because of the 2011 Tōhoku earthquake and tsunami. Nonetheless, the fact remains that consumers are influenced by gas prices when choosing what vehicle to buy. In preparation, automakers like BMW are already warning of lower sales of plug-in vehicles.

To investigate the long-term effect of this cheap oil trend on alternative drivetrains, Lux Research used its forecasting models to analyze how the oil price will affect plug-in vehicles for the rest of the decade. First, it is important to note that today's low oil prices are not here to stay: They are partly the result of a war for market share between different oil suppliers, leading a relatively unsustainable situation that will eventually correct itself. Eventually some oil producers will find they can no longer compete (client registration required), meaning oil prices will eventually creep back up.

We find that in the likely case of only a gradual return to previous prices – which we call the "cheap oil" scenario in the figure below – then electric vehicle (EV) sales will dip by 20% for a number of years, while plug-in hybrid (PHEV) sales will dip by about 14% during that same period. This percentage is relative to the other forecasted scenario, where oil prices rebound much more quickly – the "stable oil" scenario. The reason for this partial but not dramatic drop is that the consumer base for EVs and PHEVs remains relatively insensitive to oil price: These early adopters are driven more by environmentalist concerns or technical differentiation rather than oil price. To take an example, the Tesla buyer that can afford to pay almost $100,000 for an EV is not swayed too much by the economics of the gas pump. Not all EV buyers are rich, of course, but many buyers of even cheaper EVs like the Nissan Leaf are early adopters driven more by environmental concerns and plug-in vehicle perks rather than gas prices. 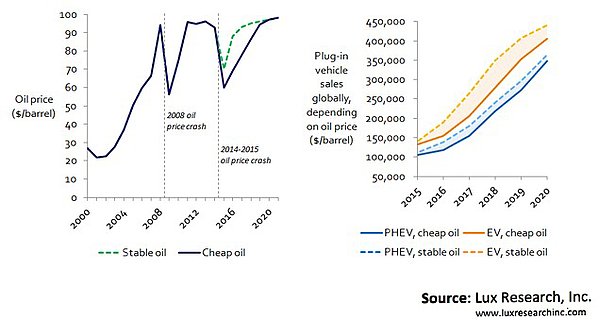 Nonetheless, the loss of 14% to 20% in sales depending on drivetrain will be an unwanted surprise for makers of plug-in vehicles. In addition to these plug-in vehicles, we expect hybrid sales will be the hardest-hit, with volumes dropping by as much as 33%, since a significant portion of their buyers do look carefully at gas prices and payback period. The situation will gradually correct itself as oil prices return to normalcy by the end of the decade. In the meantime, clients should view low oil prices as a bump in the road for increasing plug-in vehicle adoption, and not something more serious. That being said, a return to normal oil prices is not totally guaranteed by the end of the decade, adding an extra risk for automakers like Tesla that hope to sell 500,000 EVs around that time – for which they will need a mass market tired of costly gas.