The New EV Battleground: Why the $40,000, 200-mile-range Electric Vehicle will be the Biggest Energy Storage Growth Opportunity of the Future

A new battleground is emerging in electric vehicles (EVs), as more and more OEMs start to target longer driving ranges. The topic is of key importance, because EVs are already the biggest growth opportunity for energy storage: According to Lux Research's Automotive Battery Tracker (client registration required), in 2014 EVs used a remarkable $2.1 billion worth of energy storage. Meanwhile, plug-in hybrids (PHEVs) used three times less batteries – about $0.7 billion worth – despite selling in similar vehicle volumes (see Figure 1). This discrepancy is due to the fact that PHEVs typically need much smaller battery packs than EVs, since the former have an engine to extend range, while EVs have to make due on batteries alone. Hybrids (HEVs) cannot match EVs either: Despite selling about 1.5 million units in 2014, an order of magnitude more than the 140,000 EVs that consumers bought in 2014, HEVs also used just $0.7 billion worth of energy storage in 2014. The evolution of the EV – its driving range, battery size, price, and number of players – is therefore the biggest near-term to mid-term question for the energy storage industry.

Figure 1: EV drivetrains account for the bulk of advanced battery consumption in vehicles, despite selling similar volumes as PHEVs

The growth outlined above is just the start, because despite the promising revenues thus far, sales are actually going far slower than what many OEMs and governments expected: The U.S. met less than 30% of its goal to get 1 million EVs on the road by 2015, and Renault-Nissan (maker of the most popular EV, the Nissan Leaf), already admitted it will fall well short of its goal to sell 1.5 million EVs by 2016. The failure has been due to expensive batteries, which has forced OEMs' responses into two clusters (see Figure 2): The first is what we call the "economy car EVs," which OEMs designed to be as cheap as possible, in an effort to bring EVs to a mass-market by using bare-bones vehicle platforms. In practice, however, the high cost of batteries pushed these "economy car EVs" into relatively pricey brackets of $30,000 or more, while still suffering from short driving ranges and compromised quality. The second cluster is what we call "luxury car EVs," best exemplified by Tesla Motors, which made no-compromise cars with long driving ranges. In practice, this meant very few buyers could afford them. Both the economy and luxury approaches to EVs have proven underwhelming, so today the EV drivetrain remains unpopular, accounting for less than 0.5% of the new cars that consumers buy around the world.

Figure 2: The first generation of EVs clustered into economy cars and luxury cars, ignoring a middle-range battleground for EVs 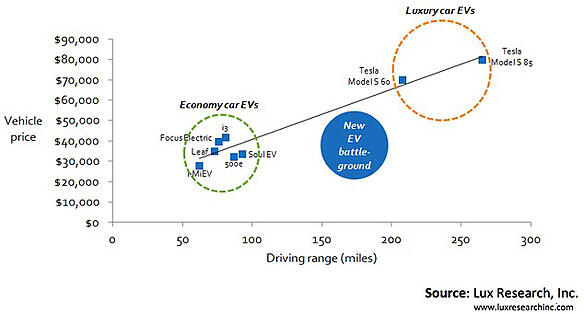 With the first generation of EVs (the 2011-2015 model years) coming to the end of their run, OEMs are preparing to enter a new – and potentially far more lucrative – market with some of their second-generation EVs. This new EV battleground (see Figure 2) has several key features: First, these vehicles will have driving ranges of 150 miles to 200 miles, about double that of the first-generation "economy car EVs." But second, they will keep the same price range as those economy car EVs, about $35,000 to $40,000. Pulling off this trick – double the range for the same price – will require dramatic lithium-ion (Li-ion) cost reduction, which battery developers are indeed gearing up for. ​Doing so will hit a real EV sweet spot, with a better compromise between driving range and price: 200 miles of range will cover far more drivers' use cases than today's more limited economy car EVs, while a $40,000 or less price point will be affordable to enough buyers to eventually garner hundreds of thousands of annual vehicle sales.

The obstacle to achieving this new class of vehicles is battery costs. The first generation of EV batteries were expensive. For example, Ford’s CEO noted in 2012 that his company was paying about $520/kWh to $650/kWh for its Focus EV battery packs. Scale and purchasing commitment is undoubtedly part of the issue as well, as Ford's Focus EV has turned out to be more compliance vehicle than high-volume production car. But even at higher volumes, it is likely that Li-ion battery packs cost about $400/kWh to $500/kWh for most OEMs. These costs are on the brink of a step-change. LG Chem Power (client registration required) is aiming to cut its Li-ion cell prices from $300/kWh to $200/kWh by 2017. Bosch's CEO sees Li-ion batteries falling to half their current cost by 2020, and of course, part of the Tesla-Panasonic Gigafactory effort (client registration required) is about cost reduction. All things considered, to compete effectively in the new EV battleground, developers will need to make batteries that cost less than $300/kWh at the pack level (or less than $200/kWh at the cell level), while also boosting energy densities to about 200 Wh/kg at the pack level.

Figure 3: Tesla and General Motors are leading the charge into the new EV battleground, and Audi and Nissan look to join them

Companies that can enable this performance – whether at the cathode, anode, electrolyte, separator, or pack levels – should focus their efforts on some key OEMs (see Figure 3): Tesla Motors and General Motors have been the most aggressive about targeting the new EV battleground; Volkswagen's Audi group and Nissan have also been eyeing this emerging opportunity. Though existing supply relationships are relatively stable, they are certainly not locked in. Nissan is contemplating switching out or supplanting its AESC supply relationship for an LG Chem deal, for example. The stakes are huge. By 2020, the new EV battleground should account for $5 billion or more in Li-ion battery sales, making it the biggest new opportunity for energy storage in transportation, because it combines larger packs (around 50 kWh) with more sales (hundreds of thousands of vehicles). Clients should therefore view this parameter space as a key place to focus efforts: Designing innovations to enable 50 kWh packs that achieve 200 Wh/kg and $300/kWh at the pack level, primarily for Tesla, GM, Volkswagen, and Nissan.