Last month the U.S. Environmental Protection Agency (EPA) released 2014 Renewable Identification Number (RIN) production data. The RIN is used by the EPA to track biofuel trading as a unique RIN is generated for each volume of biofuel that is produced. While RINs are not a commodity, there is a monetary value associated with RINs as an incentive for renewable fuel production. One RIN is equal to 1 gallon of ethanol equivalent, therefore fuels such as biodiesel generate 1.5 RINs per gallon and heating oil and renewable diesel generate 1.6 RINs per gallon and 1.7 RINs per gallon, respectively.

In total, 17.2 billion RINs were generated with 33.0 million RINs for cellulosic biofuel (D3). For the first time since the implementation of the D3 category in 2010, the mandated volume, revised to 17.0 million gallons in 2014, was met. In this insight, we will look at the five major categories of the Renewable Fuel Standard (RFS): Cellulosic Biofuel (D3), Biomass-Based Diesel (D4), Advanced Biofuel (D5), Renewable Fuel (D6), and Cellulosic Diesel (D7). Additionally, we will analyze the surge in D3 RIN generation in 2014 and its impact on cellulosic ethanol commercialization. First, we define each RIN category and describe the 2014 mandated volumes, as well as the number of RINs and gallons generated in 2014. 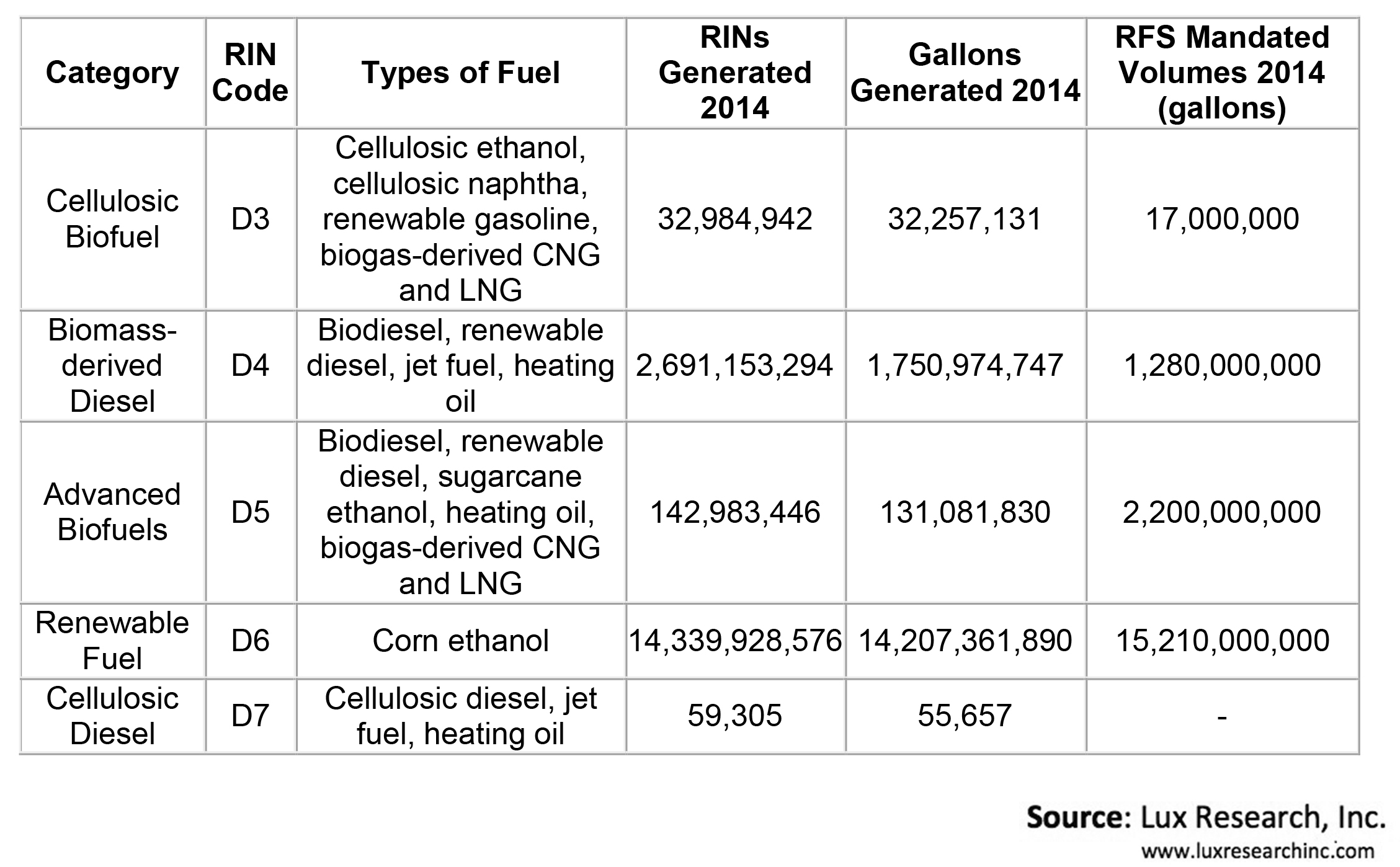 Given all of the attention on cellulosic biofuels, the D3 RIN numbers have received the most attention, and the below figure shows Cellulosic Biofuel (D3) production by month in 2014. While volume mandates were reached for the first time, we take a closer look at D3 data and uncover the reality of cellulosic biofuels in the U.S.

In 2015, it will be critical for existing cellulosic ethanol producers to prove its capability with actual production volumes. With the addition of DuPont Danisco’s facility in 2015 there will be 80 million gallons per year of nameplate capacity from the three major projects alone. In a time of low oil prices, it is even more critical for producers to strategically aggregate feedstock and reduce production cost (client registration required) (see the report "Quantifying Cost and Availability of Cellulosic Feedstocks for Biofuels and Biochemicals" -- client registration required). Companies such as Quad Country Corn Processors (QCCP) and Edeniq develop a bolt-on solution that may mitigate upstream barriers; however, it would only contribute a few million gallons per year of capacity. With uncertainty surrounding the RFS (client registration required), a lot of focus will be on newly proposed Cellulosic Biofuel (D3) mandate volumes. We will closely monitor additional data throughout 2015 to assess the viability of cellulosic ethanol production.